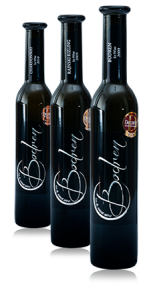 Bodren is a synonym of supreme wine predicates. The winery has spread its vineyards in a region of absolute ecological attributes, on rested hills of gentle Hrvatsko Zagorje. Besides many international awards and gold medals, in the last five years only Bodren winery was awarded with six Gold, eight Silver and six Bronze medals at the Decanter World Wine Awards in London, one of the most prestigious wine competition in the world, while in 2011 icewine Bodren 2009 has won the DWWA Regional Trophy and it has been included in Top 10 sweet wines. The most recent aknowledgement for the quality of our icewines has been received by the world’s most influential wine competition International Wine Challenge 2014 – Bodren Icewine 2011 has won Gold Medal, Pinot Blanc Icewine 2012 Silver Medal and Chardonnay TBA 2010 Bronze Medal.